Going to the Show: Mapping Movie-going in North Carolina 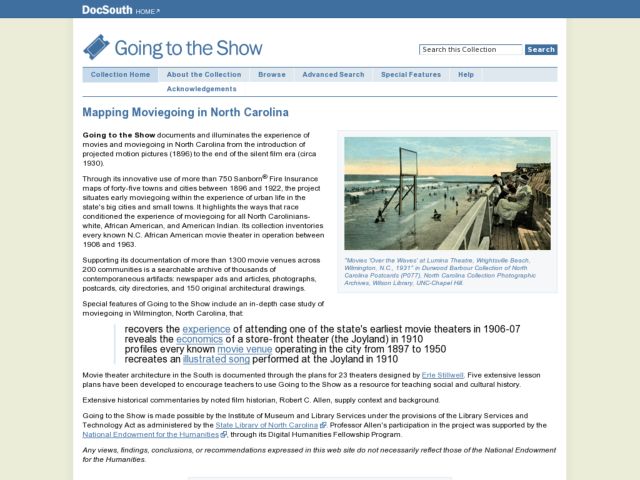 Going to the Show: Mapping Movie-going in North Carolina

Going to the Show documents and illuminates the experience of movies and moviegoing in North Carolina from the introduction of projected motion pictures (1896) to the end of the silent film era (circa 1930).

Through its innovative use of more than 750 Sanborn® Fire Insurance maps of forty-five towns and cities between 1896 and 1922, the project situates early moviegoing within the experience of urban life in the state[HTML_REMOVED]s big cities and small towns. It highlights the ways that race conditioned the experience of moviegoing for all North Carolinians- white, African American, and American Indian. Its collection inventories every known N.C. African American movie theater in operation between 1908 and 1963.

Supporting its documentation of more than 1300 movies venues across 200 communities is a searchable archive of thousands of contemporaneous artifacts: newspaper ads and articles, photographs, postcards, city directories, and original architectural drawings for 24 movie theaters built between 1922 and 1952.

An in-depth case study of moviegoing in Wilmington, North Carolina, takes you back to 1906 and the experience of attending one of the state[HTML_REMOVED]s earliest movie theaters, the Bijou. A time line displays profiles of every known movie venue to operate in the city between 1897 and 1950.

Going to the Show is made possible by the Institute of Museum and Library Services under the provisions of the Library Services and Technology Act as administered by the State Library of North Carolina. Professor Allen[HTML_REMOVED]s participation in the project was supported by the National Endowment for the Humanities, through its Digital Humanities Fellowship Program.